Mark McInerney has become the first non-Egyptian player ever to win the World Golf
Croquet Championships. After qualifying from his block without too much trouble,
Mark made his way through a tough Knockout draw to reach the final, beating reigning
champion Ahmed Nasr and 2006 champion Mohammed Nasr en route. This was a truly
magnificent feat in itself coming from a game down in both matches to win.

Mark was a popular finalist and received a warm round of applause as he walked onto
lawn 4 in his green Ireland shirt ready to begin the match.
His opponent in the final was Hisham Aboesbaa, who had made it past a quarter final
against Reg Bamford in two games to reach this stage. The first game went to Mark fairly
comfortably (7-4) but the second game could have gone either way, with Mark coming
back from a 4-6 deficit to win. Mark cleared his opponent from position in front of hoop
13 from over 20 yeards away twice before running the hoop from the boundary for the
game. Game three was to prove a little more tricky, Mark once again falling two hoops
behind at one point. Thankfully he managed to turn it around and played some excellent
shots to win 7-5.

Mark has made history by being the first non-Egyptian to win this event and the first
Irishman to win a World Championship. The CAI, Carrickmines and Ireland are all very
proud of Mark and his wonderful achievements. 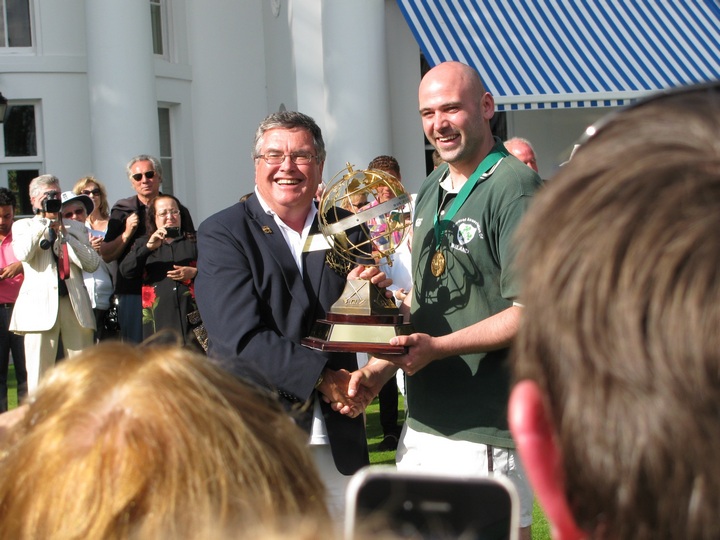 You can relive the win by reading Chris Clarke’s commentary at the link below.